GNS Science, Te Pū Ao, is New Zealand’s leading provider of Earth, geoscience and isotope research. Its mission is to understand natural Earth system processes and resources, and to translate these into economic, environmental and social benefits. REANNZ supports a specialist network, tools and services that enable data intensive research collaboration, both here in New Zealand and on a global scale. As a member of REANNZ, GNS Science are connected to crucial national and international resources, enabling its staff to undertake the research integral to New Zealand's past, present and future.

Dr Ian Hamling is an excellent example of the intersection between REANNZ and innovative research; he is a geodesist at GNS Science, Te Pū Ao – who uses satellite data to measure the deformation of the Earth’s surface. His research relies heavily on the international networking capabilities supported by REANNZ. Ian regularly downloads satellite images captured by the European Space Agency (ESA), which enables him to measure how the surface of the earth has moved by comparing radar images acquired over a point in time. These datasets then help to inform models to explain how much a fault has moved during an earthquake, or how much magma may be accumulating beneath a volcano.

Ian regularly downloads these datasets from the Alaska Satellite Facility (ASF) that downlinks, processes, archives, and distributes remote-sensing data for scientific users around the world. Unlike past satellite missions, which had limited acquisitions over New Zealand, today there are around 100 new images per month with each file being around 7Gbs in size. Over the course of a year, Ian can download and process up to 200 terabytes worth of data. There is still petabytes worth of data that Ian and the team will need to process; they are currently analysing the data collected before 2010 in addition to the recently acquired data.

Ian’s work is supported by many partners in the research, science and innovation ecosystem. He is currently working with NeSI (New Zealand eScience Infrastructure) and the University of Leeds to set up an automated processing system. This would allow automated downloads and processing of the datasets each time new data becomes available from the ESA. The REANNZ network will enable the swift transfer of these datasets to NeSI, where it will be stored and processed, and then brought back through the network to GNS Science.

It is particularly important that the network remains fault tolerant and resilient to support Ian’s research, as his work is reliant on access to his international research partners. The topology of the network both nationally and internationally is designed to be fully resilient, with automated rerouting should there be a fault, and other design elements in place to ensure uninterrupted, data-intensive research collaboration on a global scale.

Ian’s research is an excellent example of how the network facilitates critical day-to-day research. Back in 2017, the method of using these satellite-based techniques helped to build a definitive model of what occurred to the landscape within two months of the Kaikoura earthquake. These findings continue to have a positive impact on seismic hazard modelling worldwide. This contribution to his field resulted in Ian being awarded the 2017 Hamilton Award, Royal Society Te Apārangi Early Career Research Excellence Award for Science. 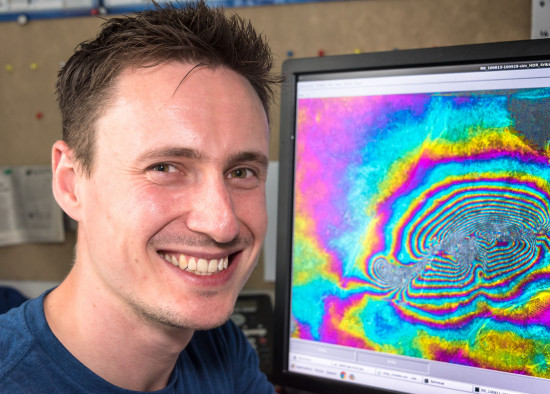